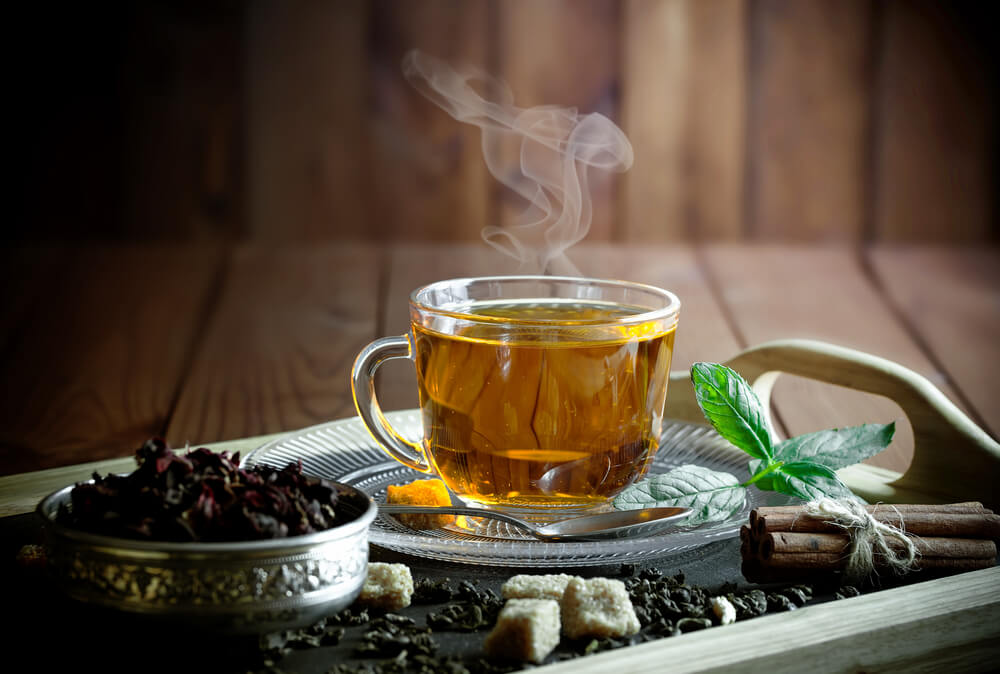 It is no secret that tea is a great health drink. There are many types of tea, each one with its own unique benefits. A lesser known fact, however, is that herbal teas are not ‘true teas’; they aren’t natural teas.

It turns out that herbal teas are made from dried fruits, flowers, spices or herbs. True, ‘real teas’ are brewed from the leaves of the Camellia Sinensis plant. Examples of this are black tea, green tea and Oolong.

This doesn’t mean that herbal teas aren’t as nutritious as they are delicious. Here are five types of herbal teas and their health benefits!

A more popular option, ginger tea has long been used as a remedy for the common cold and flu. This is because ginger has a high level of vitamin C! Ginger itself has antibacterial properties and also clears the nasal and throat passages, helping with some of the stuffiness and discomfort that comes with flu!

Ginger tea reduces inflammation and also assists in curbing nausea and vomiting. Ginger is a popular aid for women who are suffering from morning sickness.

Another worldwide favourite is peppermint tea. Besides being one of the most delicious teas, it has antioxidant, anticancer, antibacterial and antiviral properties, and also calms an upset stomach. People who suffer from digestive diseases such as irritable bowel syndrome have found relief from spasms, cramps, constipation and diarrhoea with the use of peppermint tea. According to Cup and Leaf, a popular tea blog, peppermint tea can help regulate digestion and has been proven to move gas throughout the body, relieving the feeling of bloating and cramps.

If you are a South African native, you are probably familiar with rooibos. Rooibos is a herbal tea that originates from SA and has been praised for its long list of benefits. Even though rooibos was first used as a medicinal tea, it has made its way into the mainstream as a beverage of choice in most local households.

One study suggests that rooibos tea, along with green and black tea, might stimulate the cells involved in bone growth and bone density, Health Line reports.

The same study found that the teas also lowered markers of inflammation and cell toxicity. The researchers suggested that this might be why drinking tea is associated with higher bone density.

Extracts from the hibiscus calyx and hibiscus leaves have antioxidant and antitumor effects.

The tea made from this plant has been used to lower blood pressure, and the polyphenols in hibiscus leaves may help to induce tumour cell death in skin cancer.

Do you have trouble sleeping? Or is it hard for you to unwind in the evening? Chamomile has long been hailed as the best tea to have before bedtime. It is made from dried chamomile flowers.

Many researchers believe that chamomile tea may function like a benzodiazepine, or sleeping pills. The tea is safe to consume in large quantities though and can also lower blood sugar in people with diabetes. It also helps manage the symptoms of PMS; reducing cramps and easing tension and bloating.