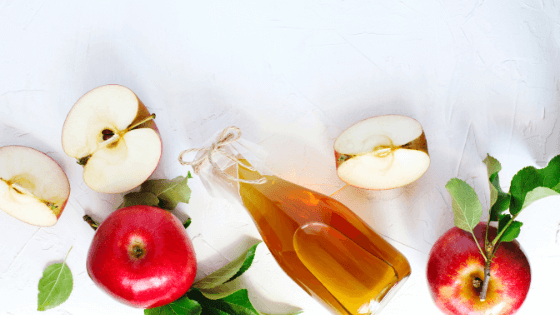 Apple cider vinegar is a popular item on nearly every ‘burn fat fast’ or ‘how to stop hair loss’ list on the internet – and for a good reason.

As an age-old home remedy, the vinegar has been used as a preservative and a disinfectant, besides being used to cure anything from diabetes to high blood pressure complications. There is insufficient clinical trial evidence to prove that the vinegar produced during the fermentation of apple cider is a cure-all that many claim it to be, but people have been using it for years regardless, for all of its natural properties.

Apple cider vinegar is a staple on homeopathic and culinary shop shelves and takes many forms, including capsules or gummies, bottled, filtered vinegar and bottled unfiltered/unpasteurised vinegar, which contains sediment and is known as “mother”.

What is Apple cider vinegar?

Apple cider vinegar is highly acidic and is composed of acetic acid, lactic, citric and malic acids and some bacteria.

As with any “healthy” products, it is best to speak to a health professional before self-treating because the vinegar may not be the right fit for people who are sensitive to acids or those who have been diagnosed with ulcers, hiatus hernia, Barret’s oesophagus, Gastro-oesophageal reflux disease (GERD), gastroparesis or people who have low potassium. In these instances, it is best to avoid all kinds of vinegar, including apple cider vinegar. And just because it is considered to be “healthy”, it shouldn’t be used in the sensitive nasal or eye area in any applications like sprays and drops or as a teeth whitener – because the highly acidic nature of the product will strip away the teeth enamel.

Blood sugar fluctuation and diabetes are not diseases that should be self-treated, but many diabetics use apple cider vinegar to decrease blood sugar spikes and fluctuations in insulin after they’ve eaten starch such as pasta and bread.

A Verywell report suggests that if people want to include apple cider vinegar in their diet, they should rather add a splash to salads, marinades, vinaigrettes and sauces. Before using large amounts other than in cooking, they suggest that diabetics or pre-diabetics speak to their doctors as the vinegar can adversely affect their diabetes medication.

Apple cider vinegar is very popular with people who want to lose weight fast. They claim that taking the vinegar internally before or with a meal makes them feel fuller faster. Most people consume much more than six teaspoons a day as was used in a 12-week study conducted in Japan, which found that there was a modest reduction in weight, waist circumference and BMI.

For centuries people have used apple cider vinegar to fight germs, and it is favoured as a medicine for sore throat and as a gargle to soothe pains in the throat – tonsillitis, laryngitis and pharyngitis.

As a beauty application, apple cider vinegar is used on cotton wool or wet wipes as a skin toner or applied directly to acne because it has antibacterial properties. Once again, caution should be exercised because anything acidic can cause injury such as burns or irritation to sensitive skin.

When applied in a spritz with water to the scalp, dandruff sufferers have reported that the vinegar combats flakes, itchiness and irritation. This is attributed to the acetic acid, which makes it harder for yeast, which causes dandruff to proliferate, to grow. The vinegar is also used as a rinse to strip away product build-up. It does not treat lice.

The vinegar is used in baths to soothe sunburnt skin or to treat insect bites and stings in a weak solution, as it helps with irritation. At no time should the vinegar be applied neat.

Some people use a solution of vinegar and water to combat body odour caused by bacteria, under the arms and feet. The vinegar smell eventually disappears.

No clinical trials have been conducted on these remedies, so caution should be exercised because what may work for one person may not work for another.

Before making any huge dietary, exercise or health-related decisions, the best thing to do is to speak to a medical professional. This can get costly, but that is why Affinity Health is here to make healthcare and advice accessible and affordable.

Affinity Health can provide you with either a day-to-day plan, a hospital plan, or a combination of both for total peace of mind. You can also benefit from booster options.

Affinity Health has created a range of healthcare products that are designed to protect you and your family when it matters most.

Contact Affinity Health today, and our agent will get in touch with you and take you through all the options available so that you can find easy, affordable cover that is handcrafted for you and your loved ones.